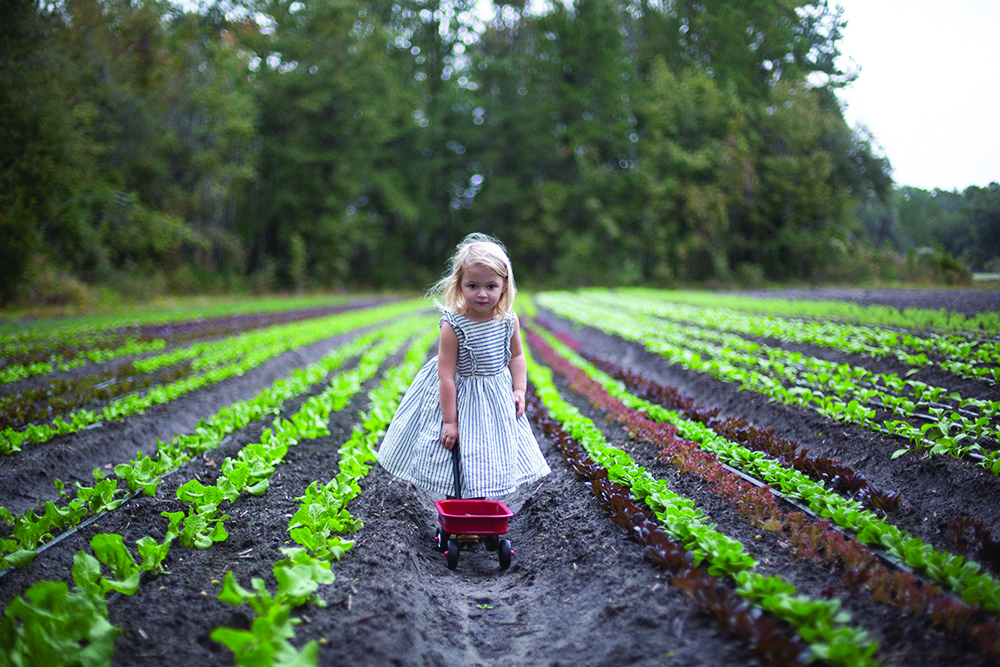 A Bounty of Flavor at Montage Palmetto Bluff

When Octagon Porch Chef de Cuisine Daniel Vesey and his team create recipes and write new menus for the guests at Montage Palmetto Bluff, they always consult Rafe Rivers, whose contributions are integral to what is ultimately served every day at the South Carolina resort. Rivers is not a chef, however, or even a nutritionist or hospitality consultant. Rivers spends his days with his hands in the dirt. He is a farmer.

Rivers and his wife Ansley own Canewater Farm on the banks of two deep tidal waterways, Knox Creek and the Carneghan River, deep in Northern Georgia’s Lowcountry. They built their farm from a 20-acre planted pine tract. “We timbered the land and sent the pulp to the mills. We then began pulling all the stumps, raking the roots and burning the debris to prepare the fields for agriculture,” says Rivers, who worked organic vegetable and pasture-based animal farms across the country including Georgia, Idaho, California, New Mexico and Vermont before starting Canewater Farm.

“The soil is extremely low in organic matter, pH, and is classified as Lakeland and Rutledge sandy soils,” he says. “These are not recommended for row crop production. This coupled with the extreme heat, humidity and pest/disease pressure makes it a challenging place to farm. And yes, the bugs are worse on the farm crew than the plants.”

Currently, the team cultivates 10 acres of vegetables with an additional 10 acres being groomed with cover crops to build the soil and use for crop rotation.

“Our mission is to build the soil through cover cropping, composting and eventually animal rotations so we can grow nutritious food for the low country communities of the Georgia and South Carolina coast,” Rivers says. Montage Palmetto Bluff will benefit as Vesey, Executive Chef Nathan Beriau and Rivers work closely to develop crops that will be important ingredients for the chef’s menus. Or, is it the other way around?

The team at Canewater Farm spends days drying garlic, jarring sorghum and tending the land. “We started seeding our baby greens and roots—arugula, radishes, spring mix, mizuna, turnips—in August for early October harvests. Collards, kale, bok choi, scallions and other transplants were out of the greenhouse and into the soil by September or October,” Rivers says. A veritable chef’s delight.

The Rivers’ understood the Lowcountry was a growing market with a need for more farmers, so they decided to build their farming dreams in Darien, Georgia. Along with the farm, the landscape provides adventure in the vast marshes, river systems and barrier islands of the Lowcountry that they explore with their dog, Waylon; daughter, Emmalou; and son, Rowan. Rafe says Ansley pulls late nights after her day job as an artist and mother to fine-tune the Canewater brand, photography and design.

“The creative allure of our farm is all Ansley,” he says of his wife. “From grits labels to market and website design, she is the anchor that keeps these boys in line at the farm.”

In a hot sauté pan, add canola oil then peppers. Let peppers cook for about 20-30 seconds. Move peppers around to blister different spots for another 30 seconds. Add soy sauce, sugar and vinegar. Reduce the liquid for about 30 seconds and add salt. Remove from heat and place in a serving bowl. Immediately top with bonito flakes and serve with Sriracha yuzu aioli for dipping.

Combine mayonnaise, Sriracha and yuzu, then whisk until blended.