Grace has led a charmed life, traveling with the rich and famous on the Hudson River and Long Island Sound in the 1920s, touring with a floating theater group along desolate river towns. She then went into for decades and resurfaced in the 1980s in a state of homelessness, when she finally was returned to her original glory.

An important part of the culture of Montage Palmetto Bluff, Grace hosts families, friends and marriage proposals and, because of a group of dedicated professionals, will be cruising the waterways for many decades to come.

Grace now sits majestically on the rich, verdant May River, her bow gleaming white in the late afternoon sun. Guests mingle on her deck, noshing on appetizers and enjoying glasses of wine. No one would guess, because of her pristine condition, that the 60-foot motor yacht was built in 1913, prior to World War I and named to honor the sister of R. T. Wilson Jr., the wealthy New Yorker who first purchased the almost 20,000 acres that he named Palmetto Bluff.

A Winding Journey to Palmetto Bluff

Grace was commissioned by Joseph B. Cousins for personal use, built in Manhattan by the New York Yacht, Launch and Engine Co. Cousins picked the style of yacht he wanted, called a double-ender, referring to the similar shape of the bow and the stern. Ready for family use, she was originally christened the Sispud II, after the nicknames of his children, Sissy and Puddy. She spent many years transporting the family back and forth to New York City from their home on Long Island.

The next owner was James Adams, who lived aboard, using Grace as transportation to his business, The Floating Theater. The theater was built on a barge and pulled by tugboats, stopping in small and large coastal cities to entertain guests with music, dance, drama and a talented cast. In 1925, the Pulitzer Prize-winning author Edna Ferber traveled with the troupe of performers, eventually writing the novel “Show Boat,” famously adapted for Broadway by Oscar Hammerstein II. The theater met an unfortunate end, sinking in 1941, but Adams continued to use the Sispud II as his home until he sold the vessel. At some point, owners abandoned Sispud II at a Rock Hall, Maryland marina. It was found there in the 1990s by Earl McMillen, sitting neglected and deteriorating on blocks. McMillen, the founder of McMillen Yachts Inc., a company that restores and maintains classic yachts, extensively restored Sispud II and put it back in the water under the name Zapala.

In the early 2000s, Palmetto Bluff was busy preserving the history of the Wilson family and searching for a period piece to reflect Wilson Village. Because the boat was built in 1913, which was the year the Wilson mansion was first occupied, they purchased the yacht and renamed it the M/V Grace, believing it was a great fit for the neighborhood.

Every year, Grace was required to pass an inspection from the Coast Guard to make sure she remained seaworthy. In 2013, they found extensive damage, the kind that could end Grace’s time on the water. The residents, inspired by their love for the boat, agreed to send her to Moores Marine, a specialty wooden yacht restorer in Beaufort, North Carolina. Two of Grace’s captains, Ed Johnson and Herb Renard, piloted her up the Intracoastal Waterway and into the care of the experienced shipwrights. After pulling her apart, they found more damage to the keel and keelson than expected, but everyone remained dedicated to repairing the special boat. Capt. Johnson wasn’t surprised to learn that more was needed. “It was like peeling away an onion,” he says. “You just keep finding more layers.”

The team of carpenters dedicated a little over a year to her restoration, removing and rebuilding the motor, replacing ribs, planks, upholstery and windows and upgrading the plumbing and electrical systems while the captains traveled back and forth to check on the progress. They were able to save much of the original construction and around 30% of the keel, plus the antique Honduran mahogany interior paneling which lends its warm, classic style to the living area below the deck. 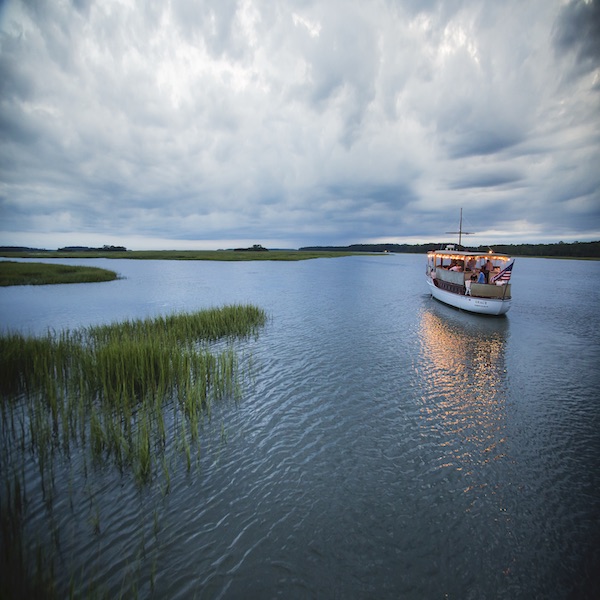 On Dec. 11, 2015, Johnson and Renard began their journey back to Palmetto Bluff. “We were on the Intracoastal and the time of year that we were traveling had boats moving South,” Johnson says. “We got a lot of horn blasts, a lot of waves. When we pulled into marinas to spend the night, a crowd would always gather.”

When they reached the area in February, they were greeted with a fleet of Palmetto Bluff members’ boats and a party at Montage Palmetto Bluff’s Canoe Club. Everyone was excited to have this iconic symbol home, ready to be enjoyed by club members and Montage guests.

Johnson understands the appeal. “People are amazed by its longevity,” he says. “We have member cruises two times a month and there’s always a waiting list.”

Montage guests can experience a whole range of excursions on Grace. The boat takes sunset cruises, has wine and mimosa trips and is available for private charters. Its companion vessel, a Hinckley Yacht picnic boat aptly named Palmetto Bluff, is available for smaller groups

On one of these journeys, we borrow blankets when Grace leaves the dock, wrapping them around our legs as the sun sets on the horizon with rosy hues. One member of our group notices a dolphin and Johnson hurries over to help her spot more, educating the guests with the knowledge of someone who spends hours on the local waterways. Spotting dophins while sipping wine, this truly is a state of grace.