Until 2013, fern medicine, which offers a long list of positive benefits, was “kapu” or forbidden to be shared in traditional Hawaiian culture until all that was “huna” or secret was lifted. Now, a Maui-based company, Pōhala, is sharing the power of ancient botanicals derived from the fern, a species whose DNA has remained unchanged for more than 180 million years.

According to Pōhala founder Ke’oni Hanalei, “of all species alive on this planet today, we know of only one who has preserved their sacred DNA throughout the evolution of life on Earth. This species is the fern. The pollen of Hawaiian ferns hold such DNA codes, which correlate to specific human emotions, traits and virtues, which I refer to as ‘The Principles of Aloha.’ Aloha, or love, truly is the highest possible vibration in this reality.

Now, guests at Spa Montage at Montage Kapalua Bay have the option to choose one of Pōhala botanical’s fern essential oils to complement their service.

“Guests are surprised by the story of Pōhala and the foraging of the ferns and botanicals,” says Jennifer Holzworth, director of Spa Montage at Montage Kapalua Bay. “This allows them to have a deeper connection with the experience, and a sense of place.”

Recognizing a perfect partnership, Hanalei—whose Maui grand-mother, as well as her mother and her mother-in-law, were medi-cine women or Kahuna—reached out to Holzworth at Spa Montage because “the area in which the spa and hotel are located is considered a Wahi Pana (sacred site) to the ancient Hawaiian people, so I’ve always been drawn to that area. It was considered a healing sanctuary to the ancient people so I felt it was appropriate to approach the spa to see if Pōhala botanicals may be compatible for their offerings. … As a child, I can recall my tūtū (grandmother) in her backyard tending meticulously to her plants. Sometimes I would snap twigs and rip leaves off of her ferns. ‘Haalele loa!’ she’d yell ‘such defilement!’ and then she would tell me the significance, the power, the essence.”

Guests receiving massages at Spa Montage have the opportunity to choose their own oil at the beginning of the massage. “Pōhala oils are incorporated into every massage we offer including all couples massage offerings,” Holzworth says. “We also incorporate the oils into our signature nail service.” 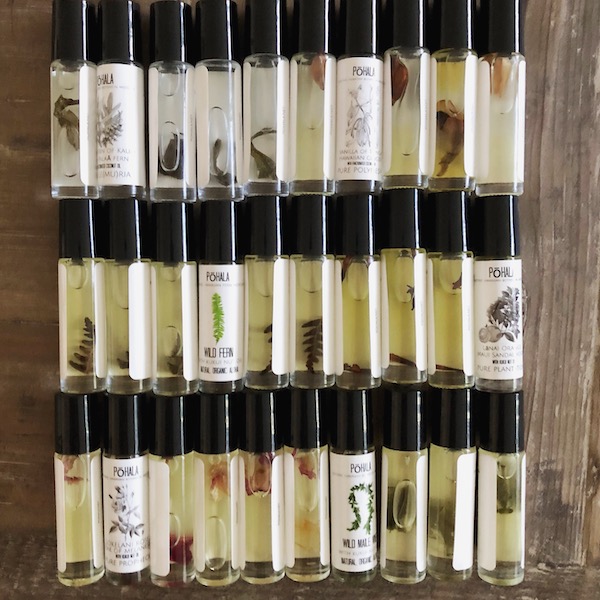 The Benefits of Pōhala Fern Medicine at Spa Montage

The Pure Polynesia oil blends vanilla of Tonga, one of the most powerful antioxidants used by ancient Polynesians, to soothe anxiety, and ginger, a mood lifter.

Pure Plantation oil promotes mental clarity with the use of iliahi sandalwood, known in the Hawaiian culture as a spiritual tree of wisdom.